YOU THOUGHT I WOULDN'T NOTICE

Update on shirtgate! For all those that I have already vented to repeatedly or have casually made aware of this complete bullshit feel free to skim and skip your way out.  And yes, this is the last you'll hear about it.  For those I haven't yet filled in, let me catch you up!  First, can I just say I was totally gonna let sleeping assholes lie because  I understand you can't argue with stupid.  BUT,  since,  baseball is over,  I have some newly freed up time and (illogically) part of me is NOT completely sure that our ousting from the playoffs isn't some sort of karma (because dude in question is a huge Dodgers fan) so my aggravation remains and has only been made worse with recent winter dealings, baseball awards and such reenforcing my belief that the Dodgers could have been somebody if not for this one dude doing someone (me) so wrong. It makes sense.

Alright, couple of months ago, I came across this image,  (the one below on the left)  on the other end of a simple google image search for "Dodgers".   I noticed the bottom left quadrant and what appeared to be a shirt made from a drawing  I did in efforts to get Puig and Adrian Gonzalez into the all-star game, that I had posted on my instagram in July.  The one on the right.  Here is the LIVE link, check the dates. 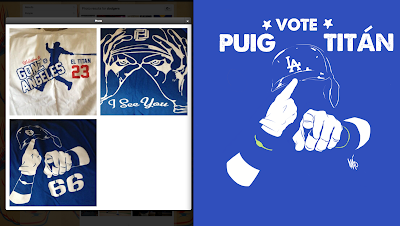 I mean, just take a look below at what happens when you overlap them.  There was no doubt, it was my drawing.  Not from a photograph, my original drawing. What was most infuriating was that the guy ripping me off didn't even try to draw it himself.  He didn't merely steal the concept/design of the shirt, he just traced it and added some ugly elements.  Every shadow shape and every line, mine. Except the botched arm where he went off the cuff. 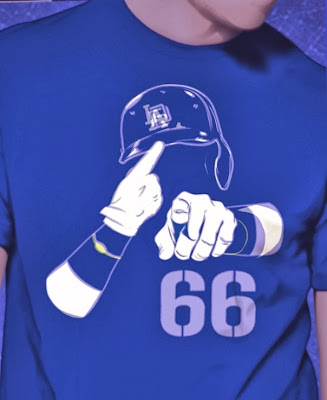 So THAT twitter image led me to -> @Dodgersbeat twitter account (not his personal twitter @rogerarrieta) then twitter sent me to his website -> www.Dodgersbeat.com clicking under the store section led me to -> Dugout Brand 's storefront on store envy, (I'll get into their stupidity a little later) that store has since been retired and reconfigured into a new monster, LAsportsbeat.  Same shit, different scam. You can tell it's the same dude just by looking at the funny looking "LA Sports Beat" logo in his header.  And judging by the looks of his pushing the limits of fair use inventory he has for sale,  he has learned nothing.  I'm suuuurree he personally took those professional photographs of iconic Los Angeles sports announcers.  Old habits die hard, I guess.  WELL it was in his now defunct Dugout brand store where I first saw my design for sale with his foul modifications, like that hideous indiscernible maze of a Dodgersbeat logo on his helmet, the "66" and the biggest eyesore, the reckless attempt at rendering the arm on the right because he was unable to figure out the foreshortening on my original drawing.  I was outraged and a little flattered at first.  But that spell was broken once I realized he was making money off my work, I stayed up drawing that shit, not lifting it from the internet.

I went directly to the source and called him out on instagram and facebook simultaneously with this post and this one.   Having tagged him (@dodgersbeat, not his personal instagram @rogerarrieta) I knew for a fact he would see it.  I was all but ready to call it a night thinking surely whoever had so blatantly ripped someone off would probably just try to disappear , lay low but then...

GTFOH.  Since he blocked me, on both instagram and disabled "fan" commenting/posting on his Dodgersbeat facebook (not his personal one)  there was no way to make sure he got my reply and I was NOT gonna let him play me out.  Especially since he decided to be a little bitch about this whole thing and straight up lie.   I had to get grimy.  I took that shit to twitter, ya'll. Yes, twitter beef. After a half hearted twitter war where he @Dodgersbeat (not his personal one @rogerarrieta) would just delete (my tweets) and  deny, deny, deny...I had it.  I furiously group texted everyone, "can you believe this shit is happening?"  but no one hear me though. They didn't want to see me worked up.  No one wants to hulk out but sometimes you have to.  He wasn't gonna take them down.  "Don't say I didn't give you a chance, we'll see what Storeenvy has to say about intellectual property." and I followed up with my threat,  I submitted my "proof" below in an email to their support address. 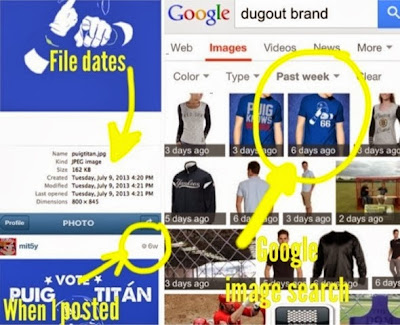 Substantial evidence on my behalf forced StoreEnvy to take the shirt down.  And I prematurely celebrated with this post, I even arrogantly bashed on one of his designs that he tried to come out with in the same style as my Puig drawing.  Only this time it wasn't so easy without someone else drawing it for him. Oh oh.  So of course it looked dumb as hell and everyone else noticed too.  He must have been keeping tabs on my posts because he quickly took down the shirt and it hasn't been seen since. :)  At least theres that, some satisfaction that I (along with my facebook friends) shamed him into retiring his OWN poor design/ rendering.  Luckily for you, screen caps exist. 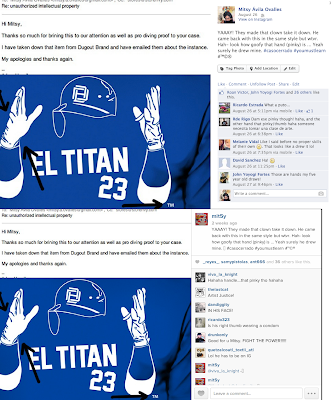 Here comes the fun part.  "Graphic designer" Roger Arrieta (www.rogerarrieta.com) of Dodgersbeat.com is a cheat and complete moron. After our day long twitter war and his denying, lying and "...I don't need to show you any proof" talk.  He hit me with this gem.  His "proof" of creation date. Look it over carefully.  Although he's mastered photoshop... 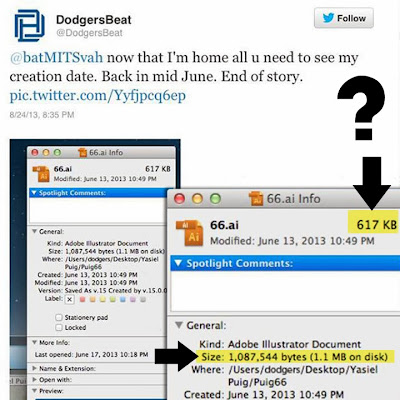 ...he has not learned to double check his work.  Tsk, tsk.  REALLY!? Now if you're unfamiliar with computers or with stupid lying thieving bitches that'll go to extreme measures to cover their butt, let me point something out to you and to Roger Arrieta if he's reading this because he sure as hell didn't  catch his oversight when doctoring this image and posting it on twitter and then submitting it to StoreEnvy as his "proof".  A LEGIT FILE ONLY HAS ONE FILE SIZE, DUMMY.  There is no way there is such a discrepancy in a file's size when looking up it's info. UNLESS of course...the file is non-existant, like good ol Rog's conscience and was cut and pasted together to uphold Roger's fiction.

He's simpler than I thought.  I pointed this out to the people at store envy, they confirmed it was the same proof he submitted to them and eventhough they initially made him take it down, they said he had provided yet more proof (gold) to back up his case.  This is what they said and more importantly showed me. 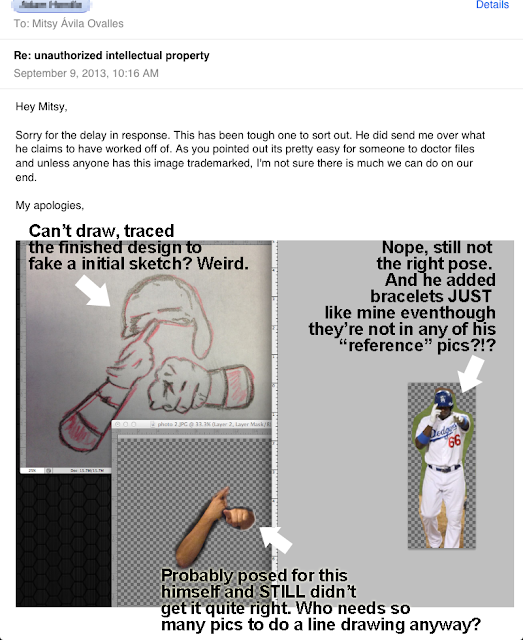 I don't even know what to make of his second round of doctored proof.  Give him enough computer time he will say that Puig posed for him in his home and is likely to photoshop images of that actually happening.  And store envy would probably buy it.  Tragic.   At least I made him sweat and work feverishly hard to keep up his ruse.  He put more work into his cover up than he ever did tracing my work.  It appears he has stopped selling the shirt in question on storeenvy and has relegated all vending of it  to ebay transactions and to those out of his trunk.   I'm sure they were only a constant reminder of what a shitty person he is, I would probably want to get rid of the overstock too.  Good luck Roger Arrieta, good luck navigating through life with your abandoned moral compass and lack of real talent. 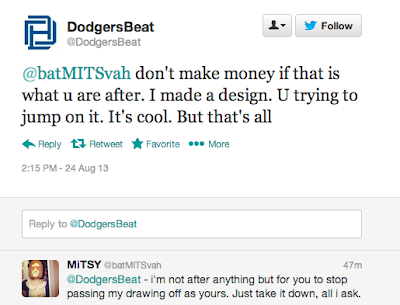 This is exchange is hilarious 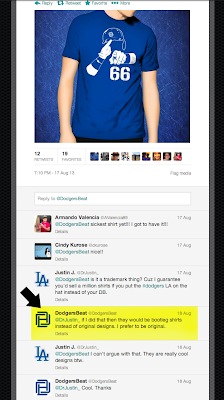 Yeah Roger, don't be that guy.

¡Puro Desmadre! I'm happy to read that you took this person to task, as I've encountered similar acts of intellectual property thievery with t-shirt designs I've created in the past. And your first inclination is to have a half-laugh of the situation until rational kick drops you and you say, I've just been "ganked" and I have to do something. I think you did what you could in this situation, but next time try a a cease and desist letter.

I admire your work, stay up.