Is it horrible that I have a google alert set for my name?  Probably.  So keep my name out your content or DON'T because the alert usually turns up a whole lot of nothing.  But today I received a couple for this video.   Here's the link to check out the accompanying write up.

Google recently wrangled up these links too... 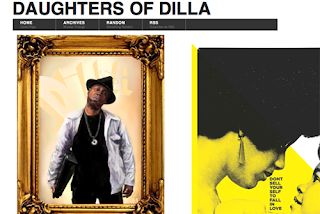 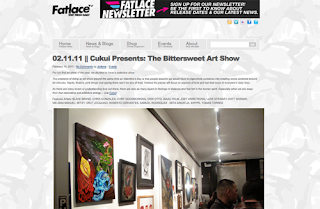 Anytime someone sends word of POSITIVE response, request or mention of my work...I NEVER buy it.  It's not even put-on humility just an innate refusal to swallow any and all favorable reception.  I chalk it up to being brown. That is to say Mexican.  NOOW, if you call me up and tell me Lencha said something stank- like my paintings are so goth right now- instinctively, no matter the sources' credibility or how far removed from first hand witness they may be...I'll believe that shit.  DONE.  Lencha is dead in my eyes, keep it moving.

It's a HORRIBLE way to live. You just can't shake that type of cultural conditioning.  It's the same hardwiring responsible for thinking there is anything legitimately precautionary about reaching across the passengers chest upon stopping short at a red light.  The same irresponsibility that allows me to believe I can prevent bells palsy by not eating dinner in front of an oscillating fan. You can't counteract a cramp by taking your saliva soaked finger and imprinting a cross on the sole of your foot (yeah- it worked because you just stretched it out trying to get to the bottom of your foot, you don't see that Mom? ) Furthermore, I'll just say it now, the sign of the cross is the nucleus of my OCD.  It's my go to move for an infinite number of ordinary events throughout the day.  Like, I'm not only doing it when I pass a church but when I see/hear an ambulance/firetruck, if I'm on the tail end of a red light, at the start of the defensive inning/possession and in attempts to alter the results of a televised rigged singing/dancing competition(s).  It's crazy witchery that science has yet to disprove so gueessss whhaaat future Mitsy's babies, dems your whack beliefs too.

Oh yeah...so I was alert texted of my cameo in a short documentary about the probably thee best producer of all time, you know I thought I was being put on.  Several interrogating texts later my interest was piqued enough to google search. Then, sure enough 7 minutes into the short MY commerative Dilla  flashes before you. Couple seconds later, art work by "MISTY" Avila Ovalles confirms...you aint all that.   And that's why browns always wait for the shoe to drop.
HERE!! Because unless you're a fan of J Dilla (which should pretty much be all of you directly or indirectly) you WON'T sit through this.  Eventhoouuggh you sit through hella paternity test results and subsequent sprints backstage at 10am and 1pm pacific ery day.


SICCCKKK.  Even if I did get played with the misspelling.


See mine has a donut on his necklace.  I'm actually not clear on why they chose to cut from the original picture I drew from  to my rendition.  Let's pretend it's for legal reasons.  Like he just wanted to throw mine up but had to credit the original flick. :) Thinking allll baad. It's ok, it's just feigned confidence. 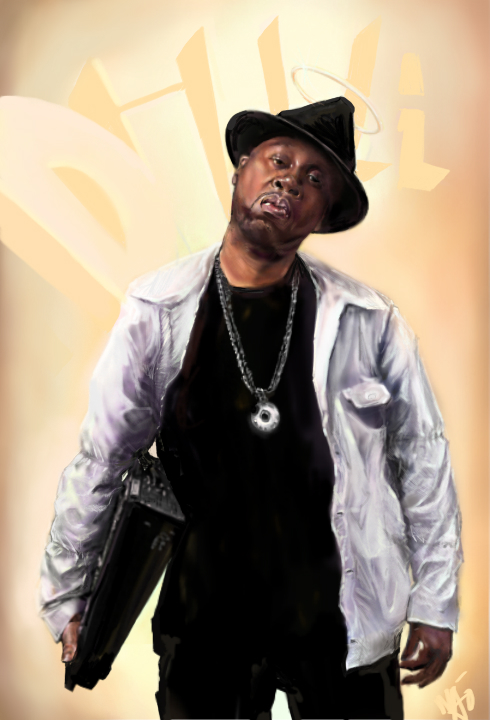 Yeah, he was pretty awesome
Posted by MITSY at 12:18 PM No comments:

I don't want to jinx it but it's only valentine's day and I've already doubled the number of shows I had in allllll of 2010. Hooow saad. :) I crashed the "Bittersweet" show over at Cukui with my very romantic "When a Macho Man loves a Woman" piece. If you think about it, it's very fitting that they would be in a bittersweet context seeing as they had a tumultuous relationship prior to Miss Elizabeth hitting the pipe alongside Lex Luger. I've also become a Randy "Macho Man" Savage expert by now. Not like to the level where I can rap along to his album but still.  Did you know he was a baseball player? He never made it to the bigs but was in the Reds, Cards and Whitesox farm systems.

Here's the piece.  Through the process.  These were taken with my touch.  I'll snap a better one when I get it back.  That battery down there is a AA.  For scale to show what a diiick that championship belt was and my tinsie three eyelash brush used to paint it.  The shorts and fringe on the piece are embroidered. 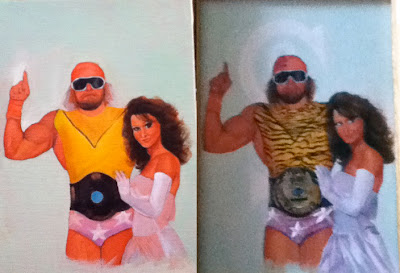 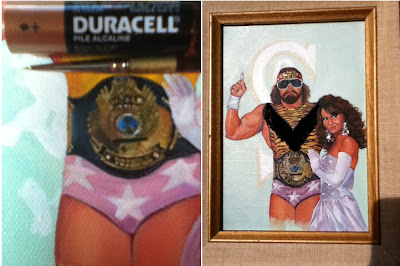 I don't know these people but they get it. :) 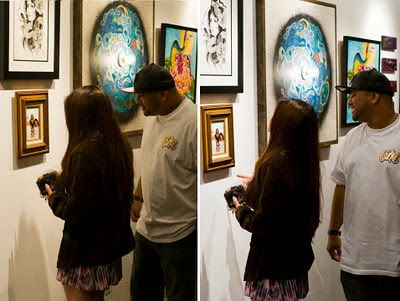 photo credit: Stolen from the internets, Ben Wild's faceplace.
Awww! I want a video montage of my relationship set to the smooth jazz of Peabo Bryson & Roberta Flack.  I swear to God right now, this will be my first dance song.
I want Randall Mario Poffo to feed me wedding cake! I want Bobby Heenan to attend my wedding reception and look on disapprovingly.  I could only hope to look as beautiful on my big day in opulent puffy sleeves and lace as Miss Elizabeth did. I am not however registered for snakes.

Also, my friend Alex caught these pics from the ChicaChic show on art business<--click for more 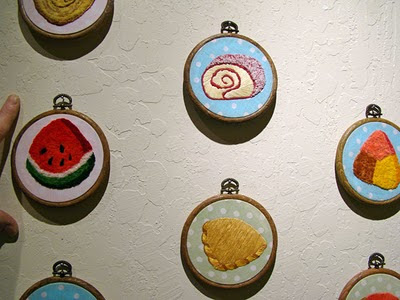 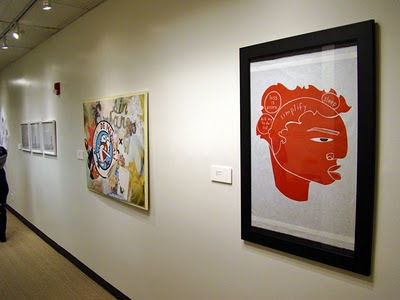