**addendum: here is another entry with some more pictures. 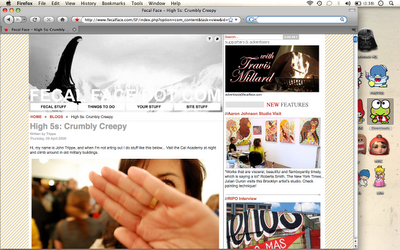 Half time blogging! After some googlage found these recaps of the Fifty24SF group show. Click the screen caps. If you're looking to check it out, live, it's up another week (or up until the 26th).

This time a bigger wrestling ring on canvas, so I was able to embroider her one pc. My cousin Little doing the obligatory Chicano crouch down in front of my wall(s).

Sports blog warning. I don't care none. Lil Wayne blogs about sports all the time. If it's good enough for Weazy F. Baby its good enough for me. Last night was a super lopsided affair in Mexican National sports.

The soccer scrimmage was only a friendly one, booooo. Where's this team when it counts? Stakes is high, WERE high in Mexico City for Group B SURVIVAL in the World Baseball Classic. The classic has been awesome. Great upsets, HUGE upsets. The Dominican Republic bounced by the Netherlands? Team Italy booting the Canucks? Venezuela winning Group C over the USA all stars (I can't stand 2/3 of that team). Crazy. Mexico seemed destined for the same whack fate at the hands of a baby Australian team that dealt them a humiliating 17-7 mercy rule loss in their first meeting. Confident off their win, the Aussies were already looking past the elimination match-up with Mexico, considering it a minor hurdle, quoted as looking forward to face the Cubans again for top position of the group. Mexico had other plans, plans to vindicate their squad in front of the home crowd. And that they did, ending the match in the 6th inning by way of the slaughter rule. Australia goes home, moded. Mexico, humbled, claims their ticket to San Diego for second round play in the tourney and faces Cuba for the top slot of the group tonight.


I've always loved Karim Garcia since his days in Dodger blue to the trouble he was on east coast. But I've never loved him more than last night. He went 4-4 wtih 2 jonrones and 4 RBIs. That explains being dubbed the "Latino Bambino", it might also have something to do with his ample waistline. Shaoooo! It should be no secret to you that, as Tina Fey says, I like my men like my peanut butter: chunky. There's all kinds of chunky in the brown lineup. I like it.

WIN!!!
I missed most of this Mannymania because I was up in San Francisco installing for a show. (see below) But it wasn't long before the calls poured in alerting me of the signing. I tuned into KNBR only get a bunch of vaGiants fans griping and consoling one another on failing to acquire Ramirez. Sacense. Go sign Barroids.
So tonight, opening reception for FIFTY24SF, "Mixed Messages"...you can read more about the other artists HERE.