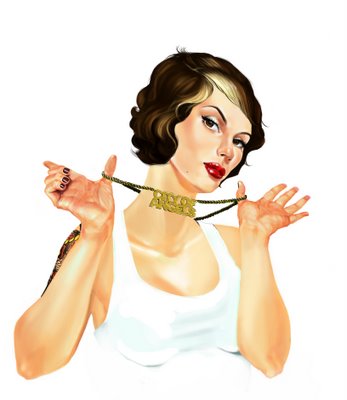 I just finished this digital piece for my homegirl Wendy creator of Lobe Riders. I've done some sketches for her in the past, anyway, she keeps me accessorized and is now my official sponsor. :) This sketch is for her new line "REP YOUR SET", I think the website will be up soon, check the links.

WIN! and calling out De La Hoya, so great. 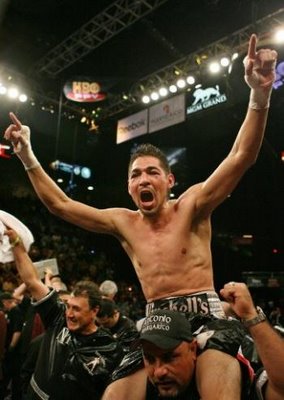 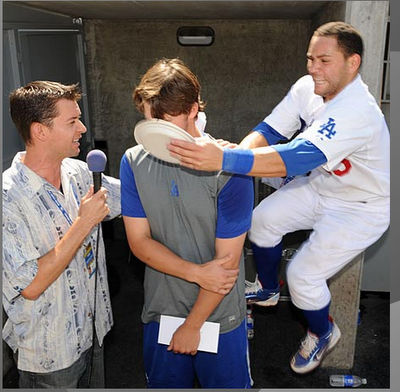 I was cleaning up my drives, found this old video I was putting together in final cut before it started acting up and drove me away. I had some more footage to cut but I don't want to push my luck with the motherboard. So here's a dance off set to the rhythms of Los Caminantes featuring Pedrito Fernandez, Carlos Espejel, Resortes, Los Polivoces, and Juanga.

I'm starting a new segment on this blog and it's called "Can you buy me this?" 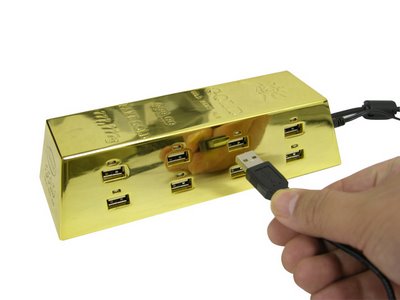 I never said I was practical. :) I need it- it's a gold brick USB hub! I hate that I can't use the mouse, keyboard and printer at the same time and my wacom doesn't have any give to it.
Posted by MITSY at 9:45 PM 3 comments:

I still geek out on all the MLB all star festivities, stop judging. But while I was on my 2 day tv binger, watching cracked out Hamilton's anticlimactic final round and the 15 innings- I caught a movie trailer for a film that represents everything I stand for. :) No, it wasn't Step Brothers but that shit looks awesome too. So it's a baseball film, based on a true story, about Mexicans, about Mexican underdogs (wait, that's redundant) AND Cheech is in it? Needless to say once I saw the clip, the googling and wikipedia-ing 5k was underway. It's actually a really great story. Here's the synopsis or if you don't like words get the scoop in the making of video. Check the second video to see the where are they now.

"Living amidst the gritty poverty of 1957 Monterrey, Mexico, a rag-tag group of boys from the other side of the tracks discover the joy of sandlot baseball under the guidance of Cesar, an aspiring Major League Coach thwarted by discrimination. Armed with the dream of playing a real Little League game, the young team members defy a total lack of resources, disapproving parents, and widespread prejudice to score their first Little League victory on U.S soil and find themselves at the beginning of a once-in-a-lifetime journey. Relying on their religious faith, a warm-hearted priest and their love of the game, the nine players and their coach embark on an incredible, record-breaking winning streak that leads them across the border to southern Texas, and all the way to the 1957 Little league World Series in Williamsport, PA, where a miracle will cement their place in history and change their lives forever.

Based on the extraordinary true story of the 1957 Monterrey Industrials Little League team, THE PERFECT GAME is an inspiring and heartwarming tale of faith."

You can click the movie title for the official trailer, but I find the Gloria Estefan song a bit much and the kid saying "A mer ica" ...ughhh. I like this one with the vintage footage better. Take me!

The first leg of my birthday was spent partying with the kids at Carlos Queso. This was two days prior to my bona fide b-day but because kids don't concern themselves with days of the week or particulars, for all intents and purposes it was July 1st. I engaged in all the birthday practices-pizza and tokens, presents and cake. The cake wasn't planned, again, not my real birth date but try telling that to Marco who will turn all of 4 in a couple of months. He felt gypped and someone was gonna hear about it. "What are you waiting for guys?!? Don't worry Tia Mitsy, we'll get you a birthday cake! Lets get money from Nino." So, upon Marco's thoughtfulness or sweet tooth, he and I took a trip to get my OWN cake. Things got sadder when I had to tell homeboy at BR to ice the cake with my OWN name. I paid with cash but should have used my ATM, so that he too could be in on the cruel joke that Marco put me up to. :) Also, I want it noted that my lil nephews not only blew out my candle(s) essentially stealing my birthday wish, but also got to lick the action figures clean (Venom and Spidey-thats what they were playing with) and even did the mordida. They also had a great time "helping" open MY presents. In other words, they punked me for all fun parts-watch when their birthday rolls around, watch.

Yeaaaaahhhhh presents! I got this rad Lasonic ghetto blaster ipod dock/radio. It does all kinds of things I ain't figured out yet but it has a remote and it's my new favorite thing. My brother got me some Dodger stuff, including big headed Russell Martin and Saito to add to my collection. 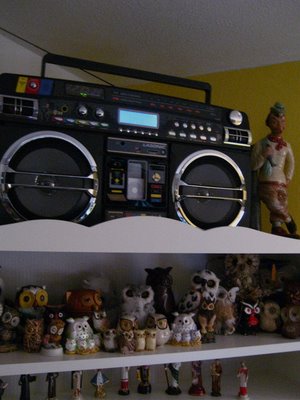 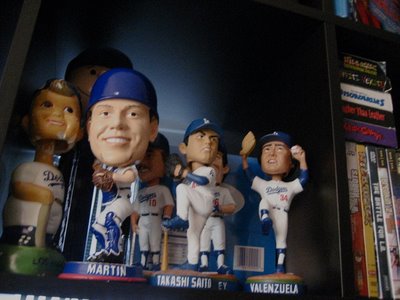 My favorite present arrived later that week..tickets to see the Dodgers in San Francisco. Best seats ever, right by the visitors dugout behind the commissioners box. They ended up losing that game, but snatched the series. I think I'm a jinx. Whenever I go to that ballpark, they lose. Probably cause I'm too busy eating garlic fries and forget to do the sign of the cross. LA's lack of offense made pobreZITO's pitching look good. How do we lose to the Giants cheapest pitcher and take two against their aces? Ugghh. But it was really fun and I was hexa close, close enough to determine the texture of each players hair. Yeah, I'm creepy. 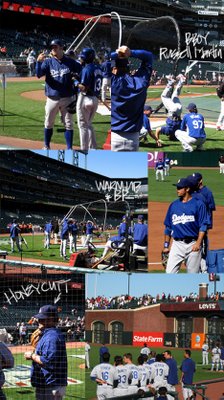 Larry King was there, he's a big Dodger fan and probably the only fan alive that knew them as the Trolley dodgers. I swear to you, he is the physical manifestation of Mr. Burns. It's crazy. This is his posterior alongside Brad "Centavo" Penny. 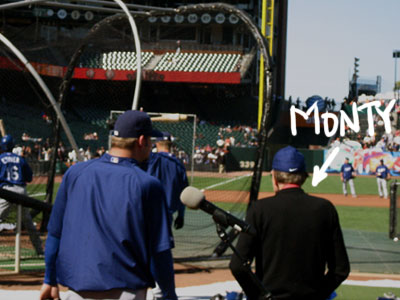 Remember I told you my Mom was a big autograph seeker? Well, of course being just mere feet away from her favorite boys in blue, it should come as no surprise to you that she hounded the roster for their John Hancock. She was pretty successful but still has her eyes set on getting more of the infield and the pen. Personally, I don't like breaking the fourth wall- I think I'm scared of finding out people I admire will turn out to be cockholes and/or short. :) 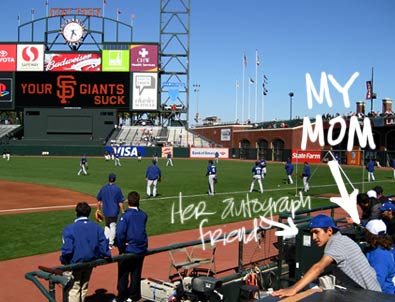 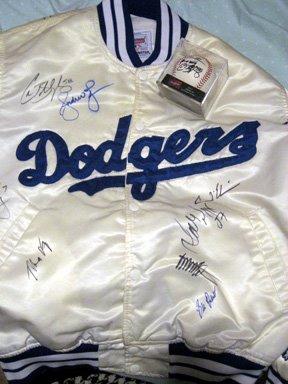 We've dubbed each player with a nickname but I had to remind my Mom those are only to be used in privacy. Here's who she got... Andre "Baby Boy" Ethier, James "Looney Tunes" Loney, Andruw "Gordo" Jones, Chad "Nalgas" Billingsley, Blake "BlackDeWhite" DeWitt, Luis "Maza, Maza que mas aplauda" Maza, Matt "Mateo" Kemp and Manny Mota. She now loves all the outfield (including Jones...she wants the fans to cut him some slack, ignore his average because he's really "simpatico" and "sonriente") any player that didn't "sign" are "sangrones." She had a cute moment with closer Takashi Saito where she called out to him while he stretched his hammies and showed him her shirt, #44, his number. He laughed. 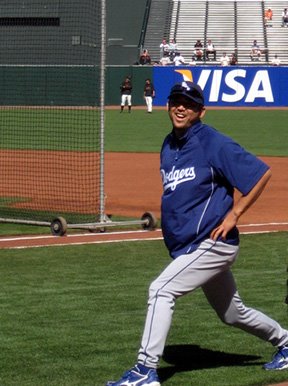 And since then, check out what LA has done. They've come close to 2 perfect-no hitters, (Kuroda into the 8th, Lowe into the 7th) and between those two gem starts...Billingsley had a no hitter for 4 innings before he completely fell apart. :(