My accomplice Ricardo aka "Ramo" of $NAKE EYE$ interned with Jeremy Fish this summer and helped out & drew up "walk cycles" (I don't know? some animation term) for Aesop Rock's new video "None Shall Pass" off his new album by the same name. CLICK THE IMAGE BELOW TO CHECK IT OUT. If you're not all super fan and have difficulty making your way through the labyrinth, hit me up and I'll supply the answer key. They're pretty simple questions, and for each one you answer correctly there's a mp3 or lyrics file you can DL. Check it. 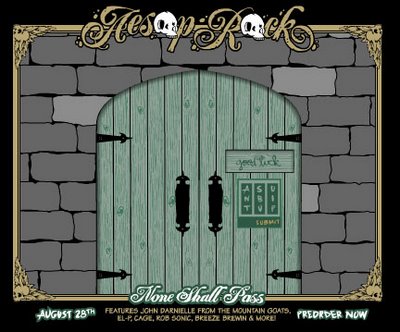 How awesome is it that a team from Chicali (Seguro Social de Mexicali) is playing at Williamsport in the Little League World Series? They play tomorrow against the Latin American representatives & Taipei. I grew up in and around little league, so it's just fun to watch...fun to watch kids CRY. Scratch that last part, but it does happen.

Uggghhh, the Dodgers stink. They're slumpin' hard and no amount of prayer, ritual, superstition or Randy Newman is helping. (*note the bobbleheads on my bathroom altar) So I thought I'd put it out into the world wide interweb and hope for some intervention. It wasn't but two and a half weeks ago that LA was on top. What happened? Even Nomar has had it, he was ejected last night, the first time in his 1,300 game career. And now he's on the DL with a sprained calf. Alright, alright I know this isn't a MLBblog, so I'll quit now. 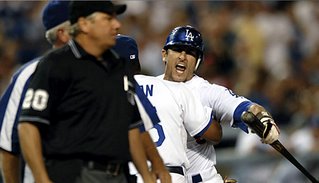 I really came on here to announce that I've put up some new image galleries. You'll be able to see more recent work along with some older stuff not found on my terribly outdated website. By the way, I have no way of updating my site so if you know flash, hit me up. I haven't finished all the updates but check out what I do have up and bookmark it for later later. Click the mock up for the link. 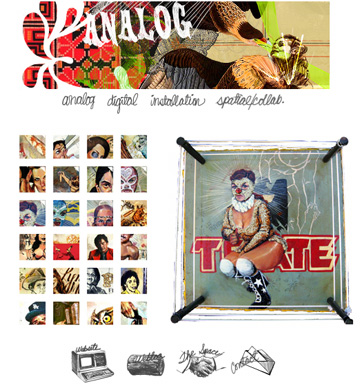 PostScript: The gallery theft coupled with the trolley Dodgers lack of offense drove me to retail therapy. Here are some more junk finds from TJROSSDISCOUNTS. 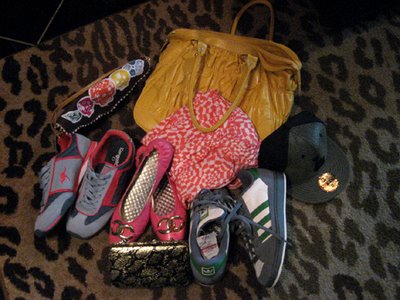